The last month my work on the layout has been focused on testing the track and re programming all the locomotives. I still need to install JMRI on my train computer but the boss has this on loan.
Some of the diesels had lost their memory and had to be programmed again. I installed a second programming and test track above the work bench. I also added another LED bright white strip to complement the warm white strip above the work bench. This has improved working conditions tremendously for the old eyes.
Below are some photos of the layout today. The structures are not in their final positions and in some cases may not be used.
One structure I built over the last month was the Central Valley 150 foot truss girder bridge - a photo of it is included below. I built 2 of these. One was the older (1815 model) and the latter was the #1820, which has a slightly higher bridge that accepts double stack container wagons easier. The older unit I used as a trial and will sell or give away as I have no need for it. They are terrific kits and really produce a great model after a day or so of careful cutting and assembly, and some substitute parts. I used small piano wire in lieu of the flimsy plastic braces in some sections as recommended by others on the web.
Here is the bridge in position before any scenery. I removed a section of spline roadbed and installed the Peco track that was already in place, onto the bridge after removing all the ties (sleepers) and painting the rails. I used super glue to glue the track to the bridge base. Then I glued the bridge base and track to the truss structure. Next month the scenery in the area may be completed and I will include a photo or two. 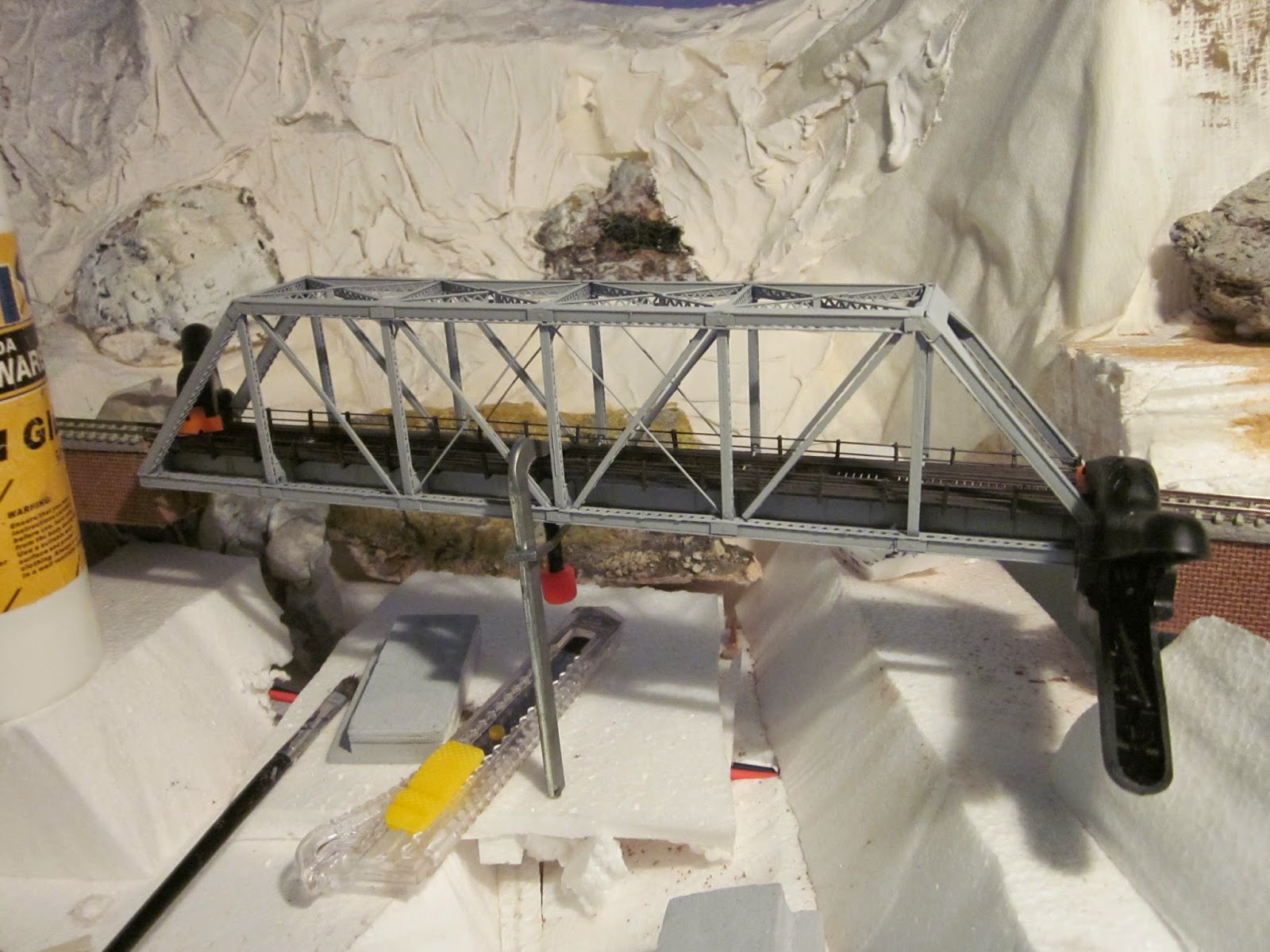 Over at BeauTown all track is in place and the ground scenery is gradually being developed. Across the layout I have used Tam Valley "Frogjuicers" to switch polarity of the frogs on the Peco Electrofrog switches. However in BeauTown I have used DTDP micro switches. These are very reliable and cost a lot less. The construction of these has been covered in many articles including by John Saxon, in the Australian NMRA web site. The frog juicers work extremely well but at about $10 per switch are much more than the DPDT ground switches that do the same job. 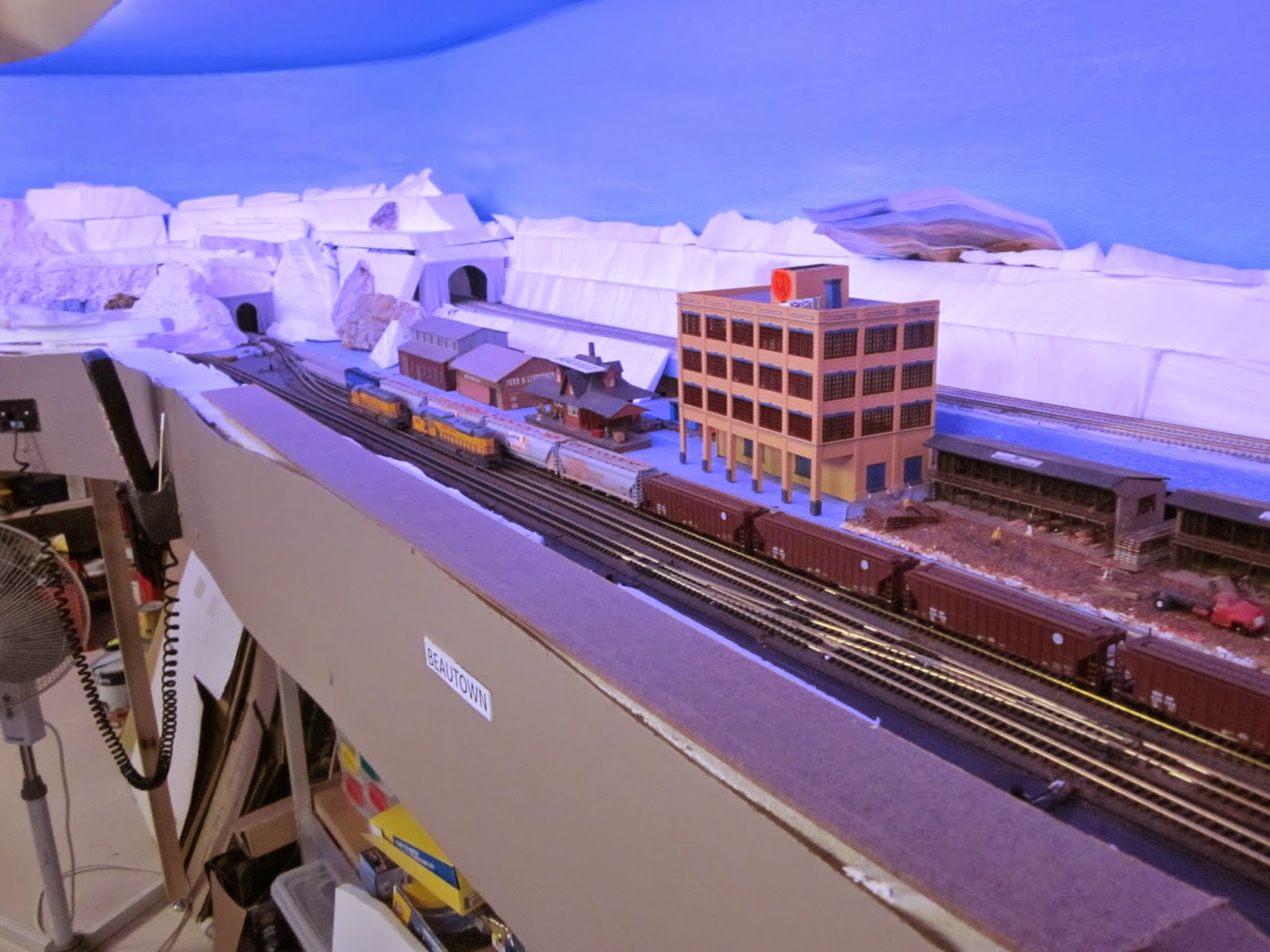 Here is more ground work being done around Beccy Power which will be an active mine and industrial site below the cliffs.
Note also I changed the colour of the fascia and valence from black to a brown colour. As the area being modelled is western USA the earth colour will be a lighter brown / yellow and will blend in better with the fascia. 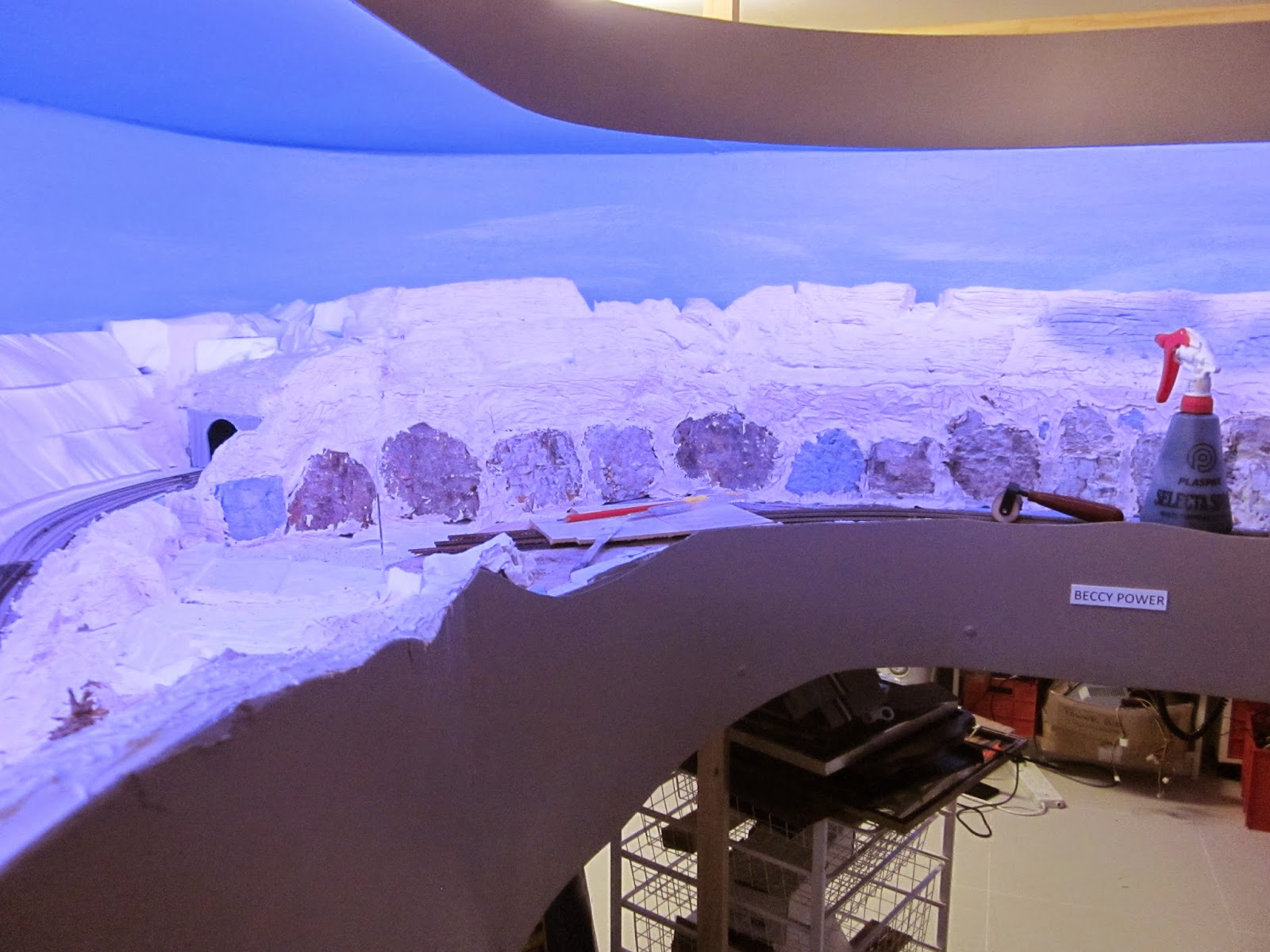 Here is a scenery divide and early rock carving. My rocks are a combination of cast moulds and Gyprock "Top Coat" carved as it dries. The base has been previously described and as you can see it is  mainly styrofoam (insulation quality - not the packing beaded foam), and screen wire, paper towels soaked in white glue or one small section where I used toilet paper and white glue to mould the base formwork. The Gyprock top coat is an excellent material and dries hard and strong with just a thin coat. 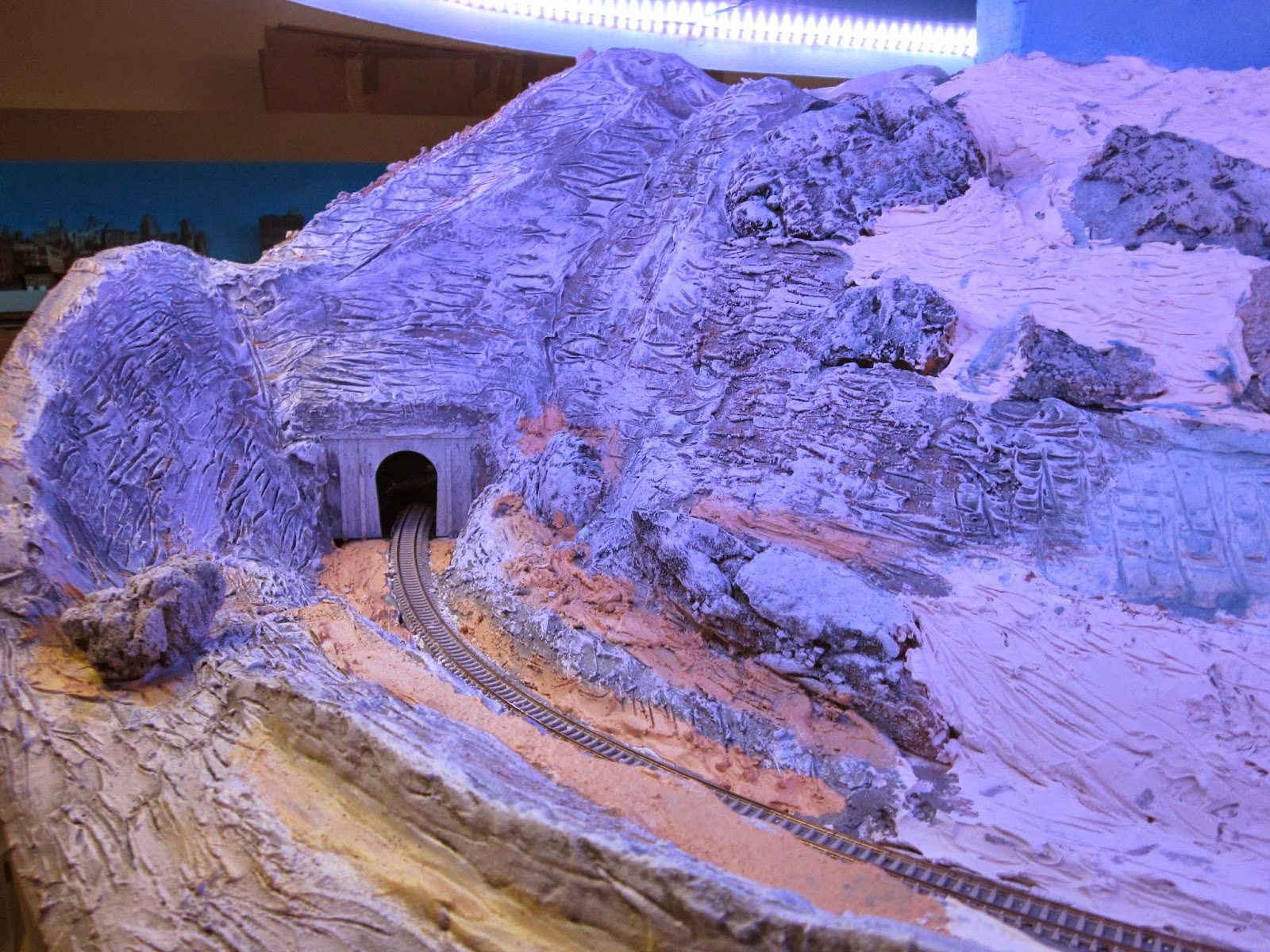 Here is Harley Industrial. The lower section - Scooter yard, is a staging area and reverse loop. From the viewing side of the layout this staging area is basically hidden. For those vertically limited it is hidden. 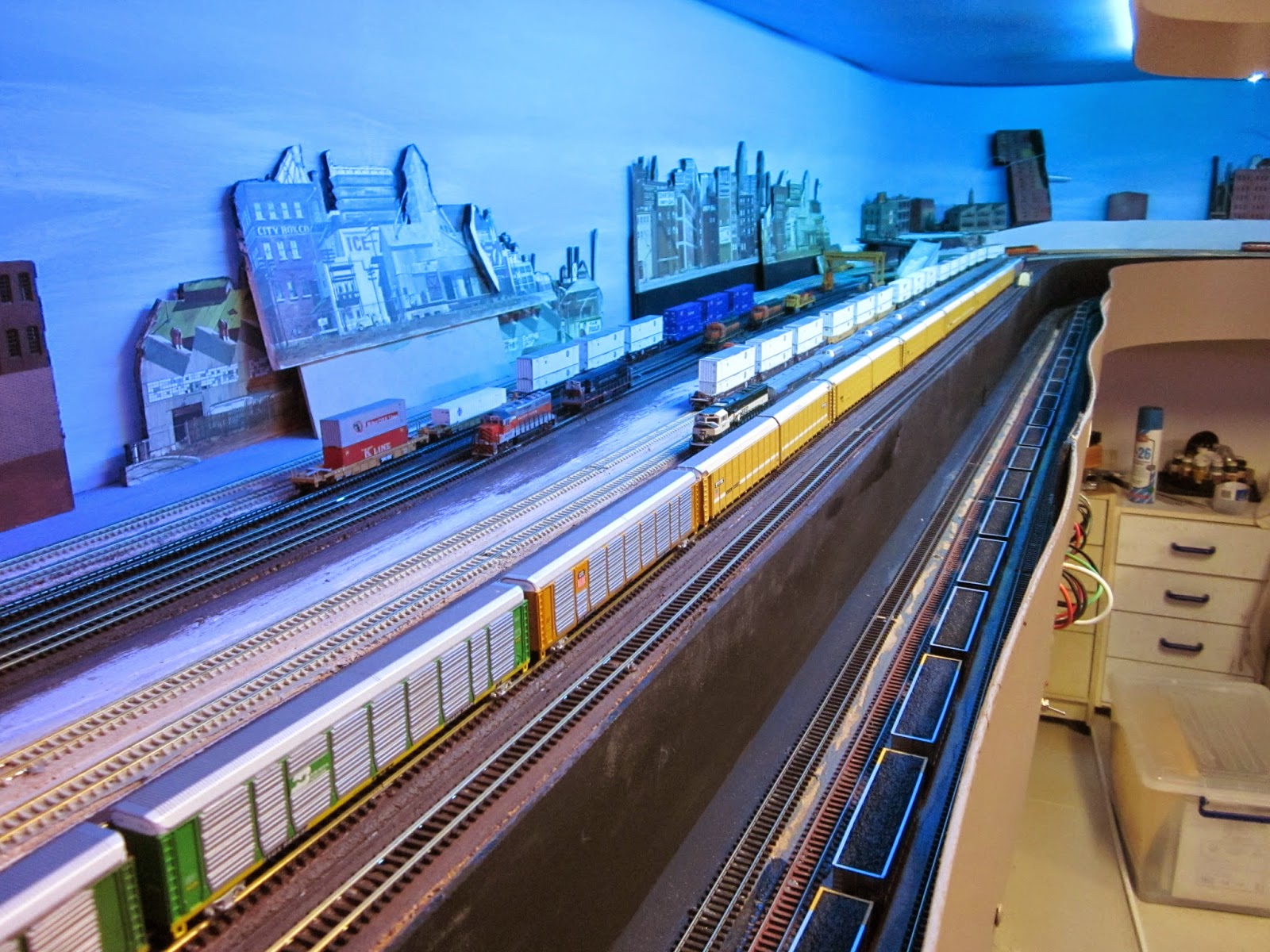 Here is a future Intermodal yard. 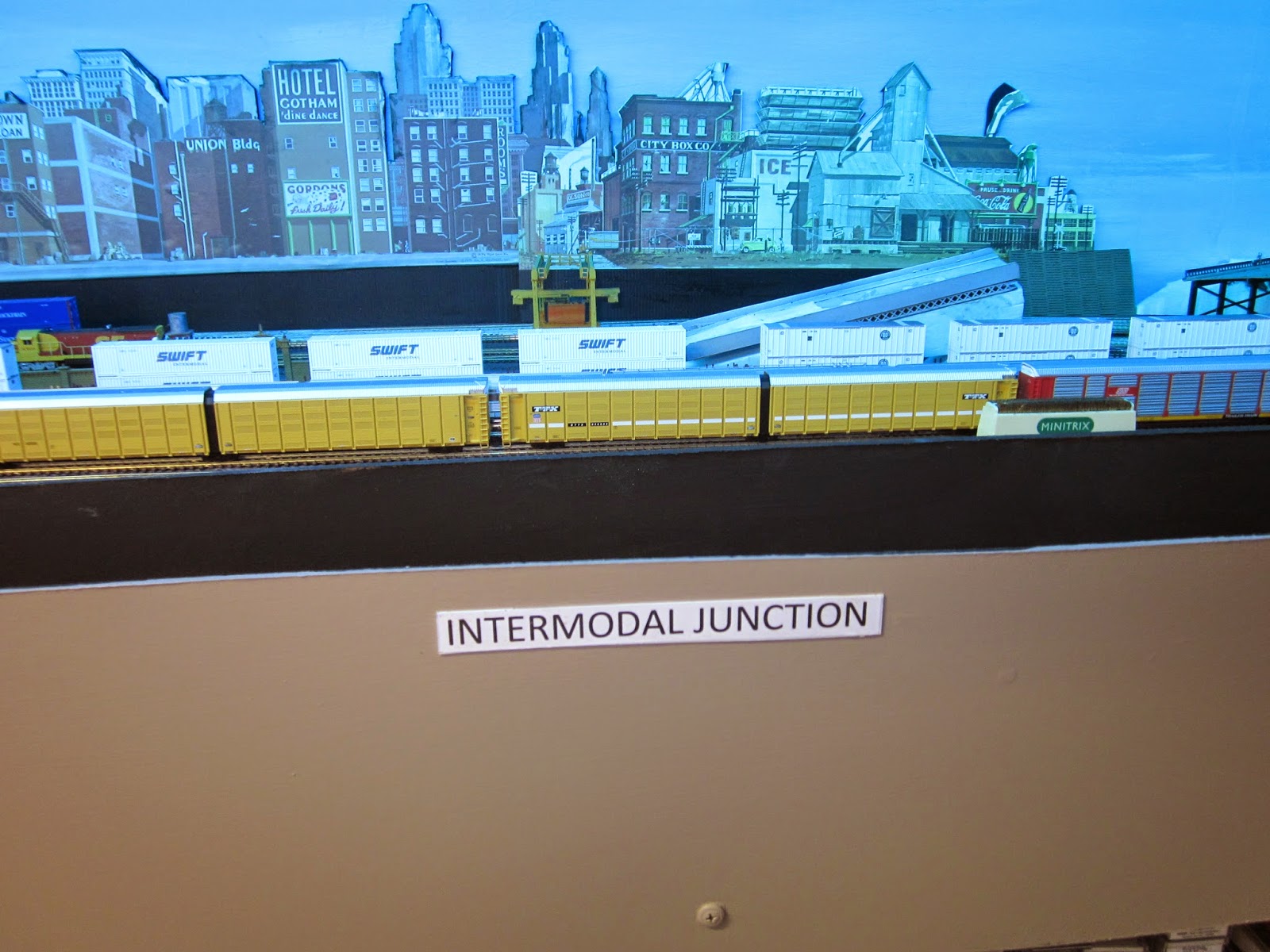 As we move from the Industrial area of Harley to the city of Leesville the scenery will transition as well. I plan an overhead bridge as a scenery divide. Here is one I may use to test location of buildings and roads. 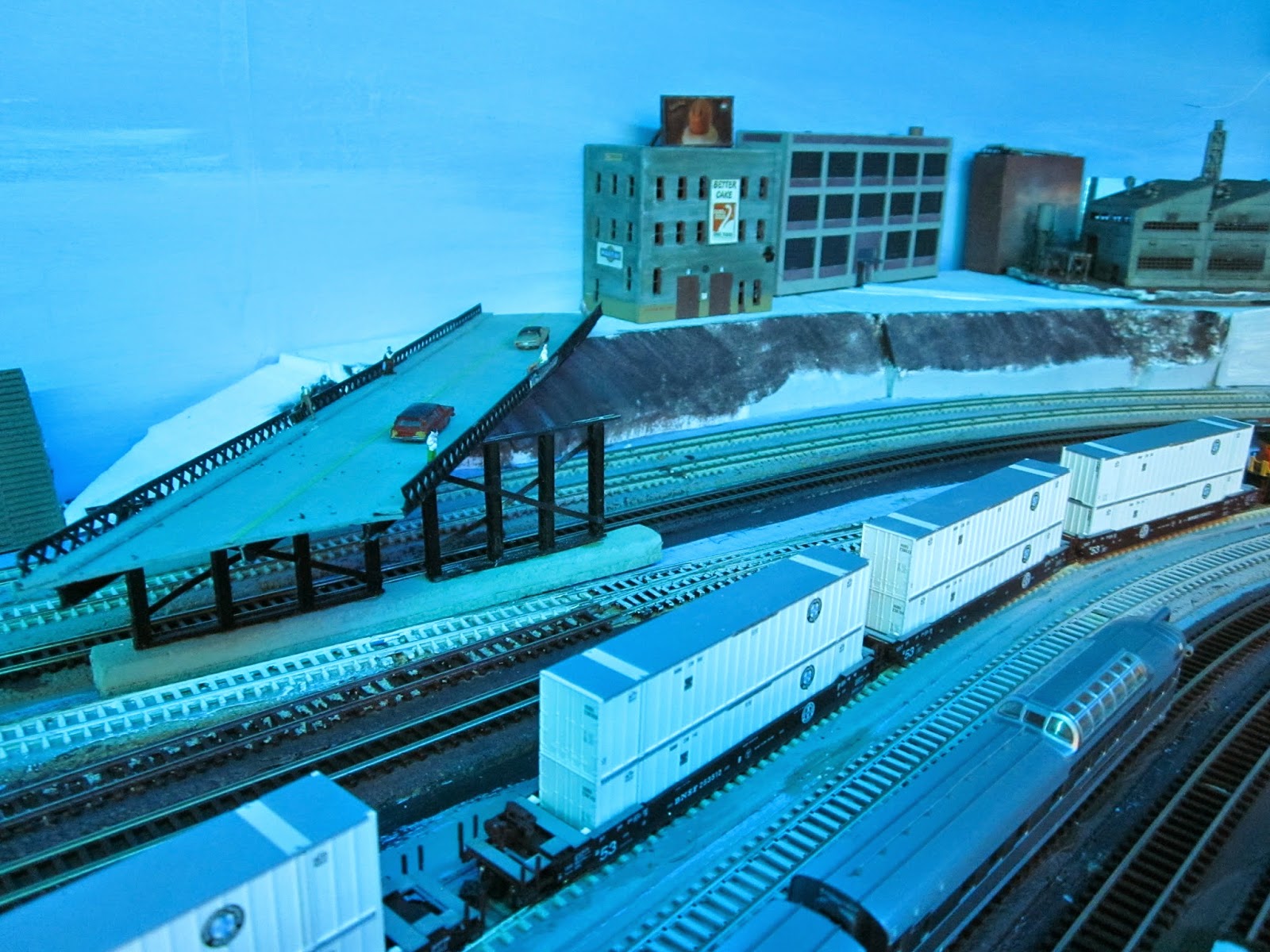 Here is a highway bridge under construction at the exit of Summit. The mainlines are all concrete sleeper tracks and the yard tracks are wooden sleeper - all code 55 Peco. The bridge is made entirely of plastic, except for the concrete pier on the left, which is blue styrofoam - a waterproof and very strong styrofoam I have previously used for base boards on layouts. 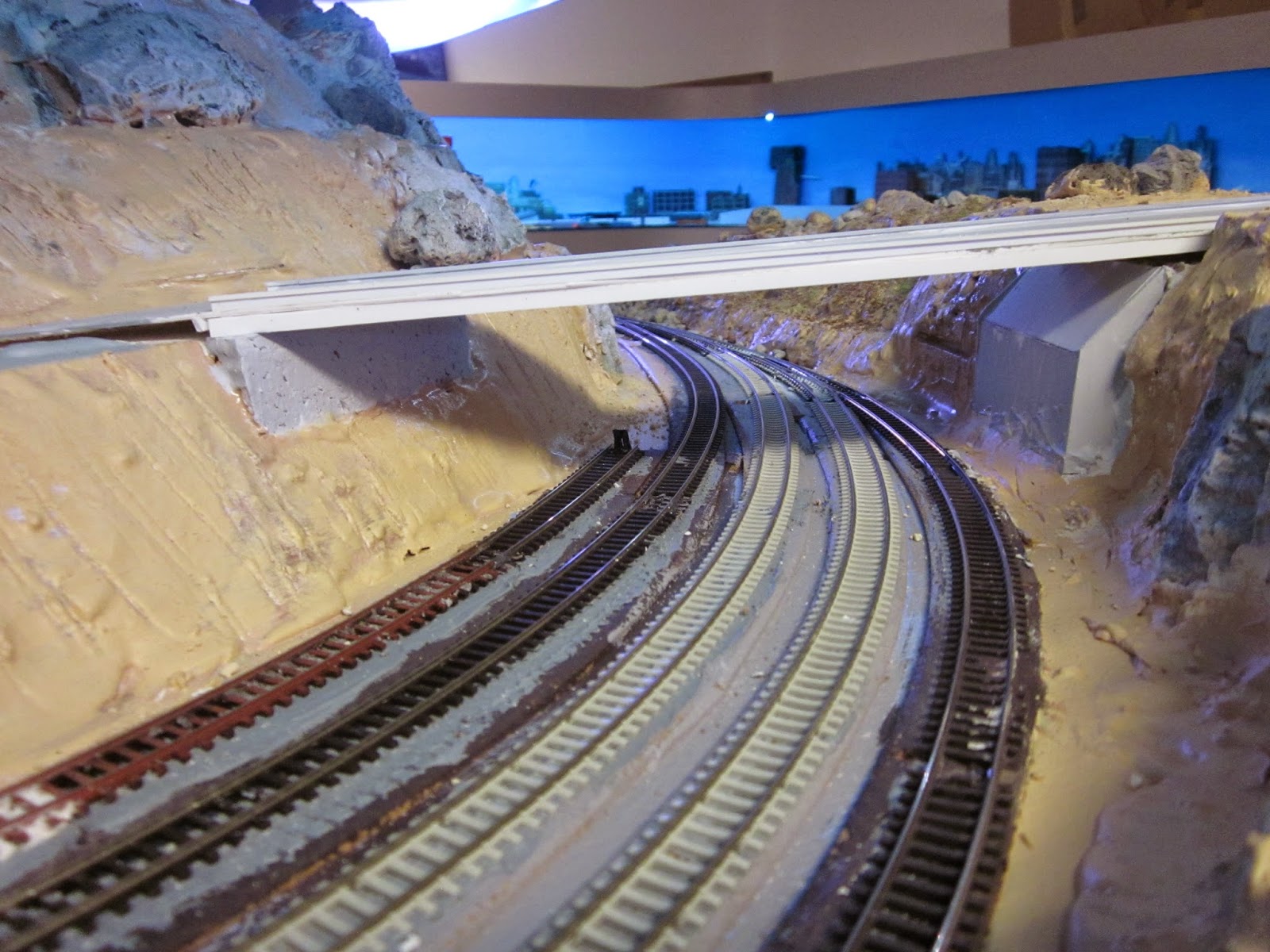 Around at Gleeville the turntable has been installed and we are in the process of installing tracks. 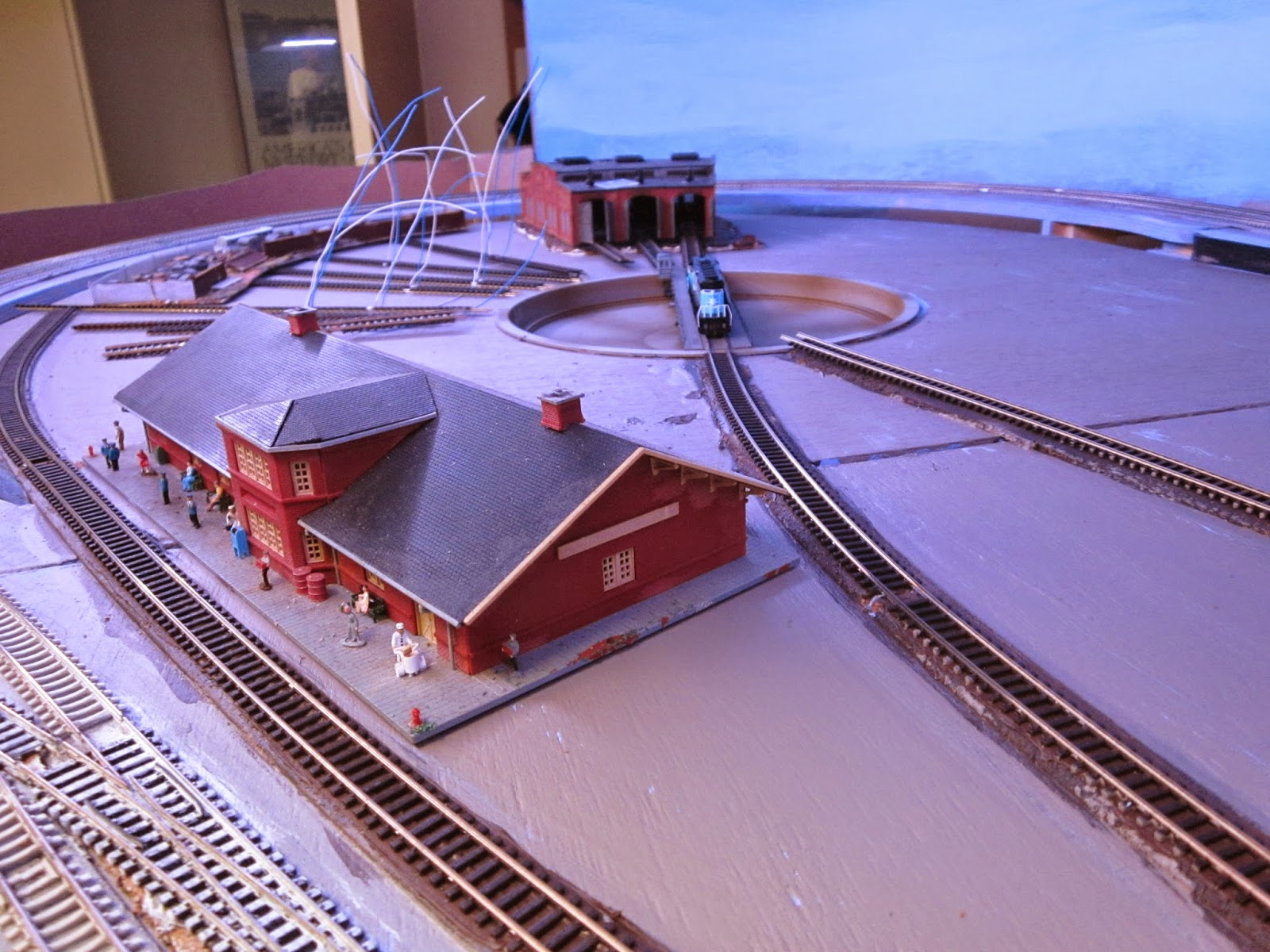 Above the station area at Leeville will be a city. Several of the building are from previous layouts and others are still under construction or in boxes. I will seek advice from colleagues for the eventual layout of the city. It will also give me a chance to use up all the vehicles and hundred of people I have in containers from previous layouts and recent train shows and visits to model railroad shops across the globe. 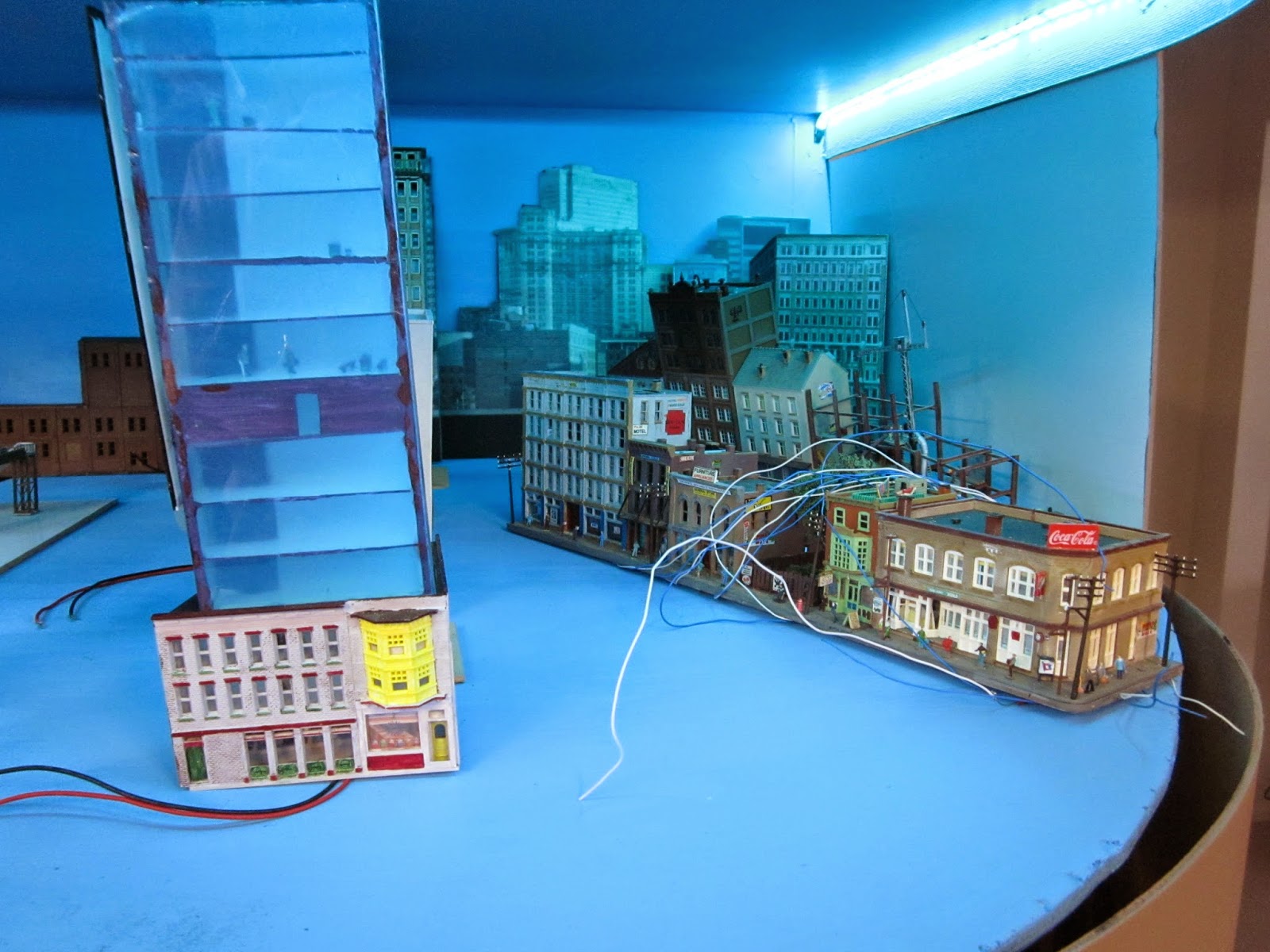 I still need to construct the main station at Leesville which is based on a Union Station kit. 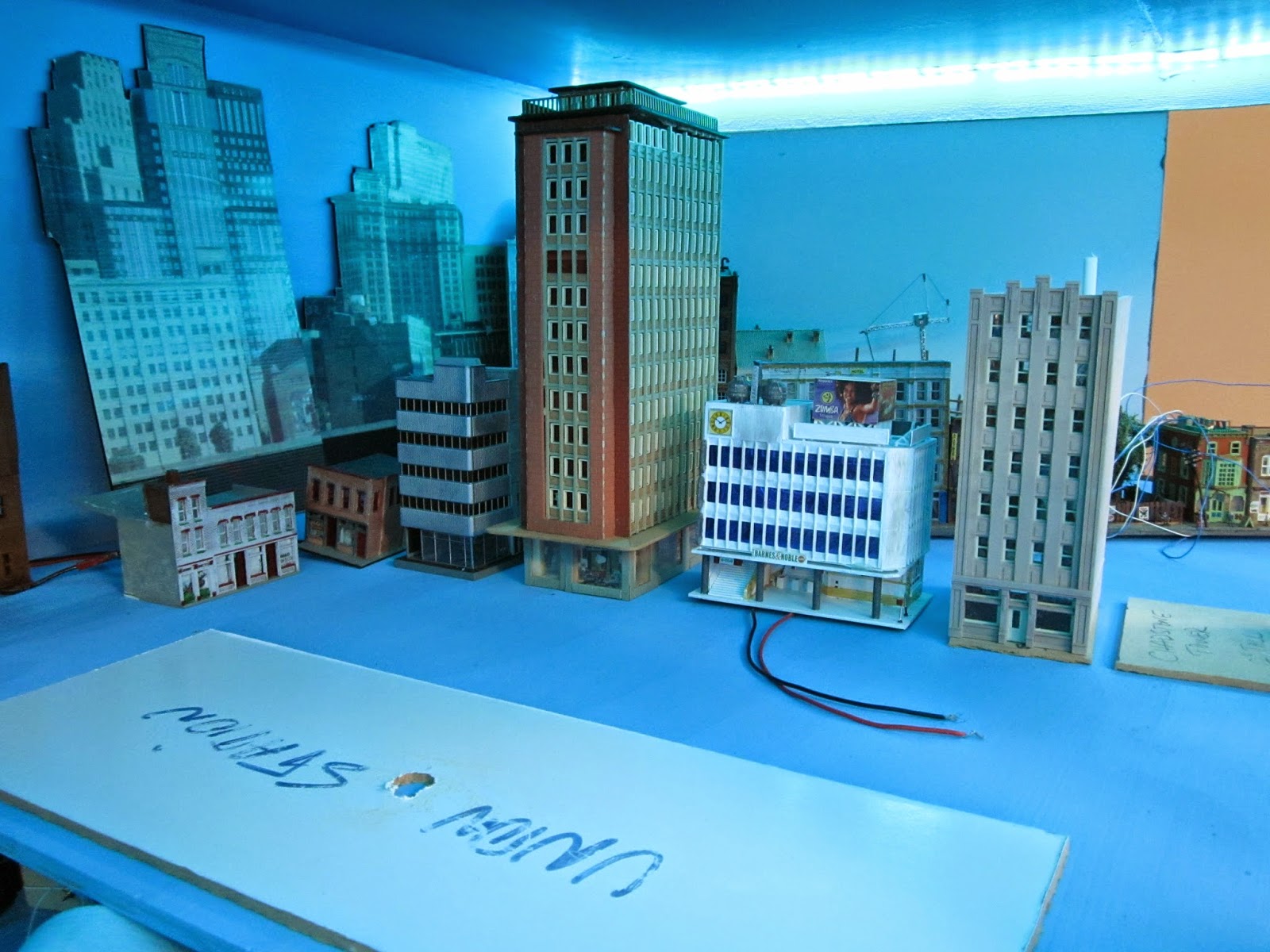 Here is a partly completed section of the single track through the mountain area. Only the first section of scenery is done. I have to make and install many many pine trees and desert grasses yet. The track will be ballasted last. 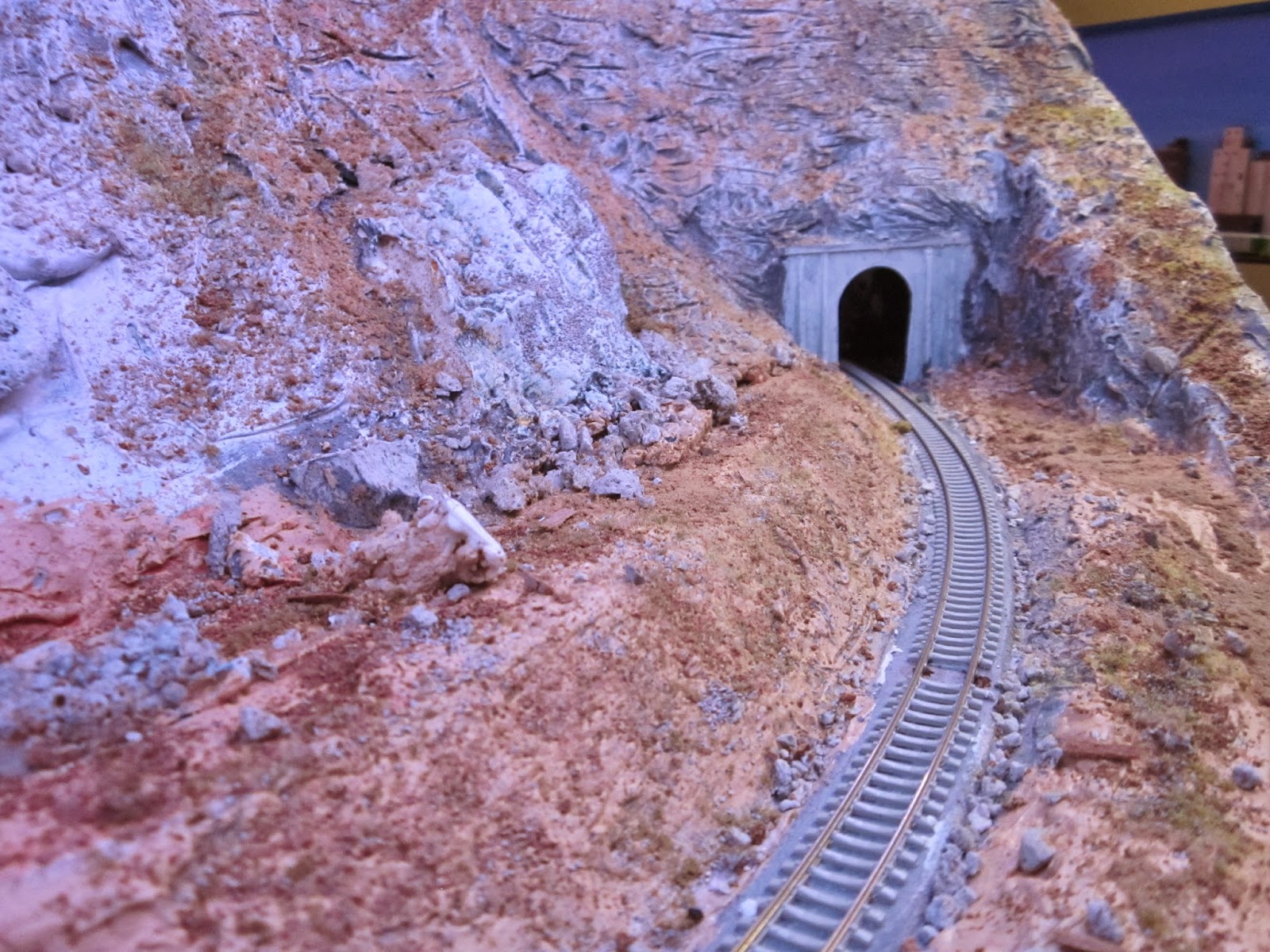 Hope you enjoyed the update.