I retired on March 31, 2014 and with the benefits of the planning done over the previous years, I was able to check out timber suppliers the next days. I chose top quality birch wood ply and manufactured framing timber rather than cheaper pine as it was more true (straighter).

Below is the layout room as finished by the builder and the first box frame installed. The round "pipe" on the wall below the frame is a 90mm exhaust for the painting booth I will later install.
The box frame is made from 68 x 18mm dressed lumber which is dimensionally stable and basically straight. I used a drop saw to cut the sections and assembled the box sections in my garage with screws and white glue. I supported the box frame as best I could whilst screwing to the walls. At this stage the frame is not 100% stable and strong enough to support the railroad. However once sections are joined they are reasonably stable. In some areas I installed braces from the outer frame end to the wall at the skirting board and this ensured the bench was very stable. 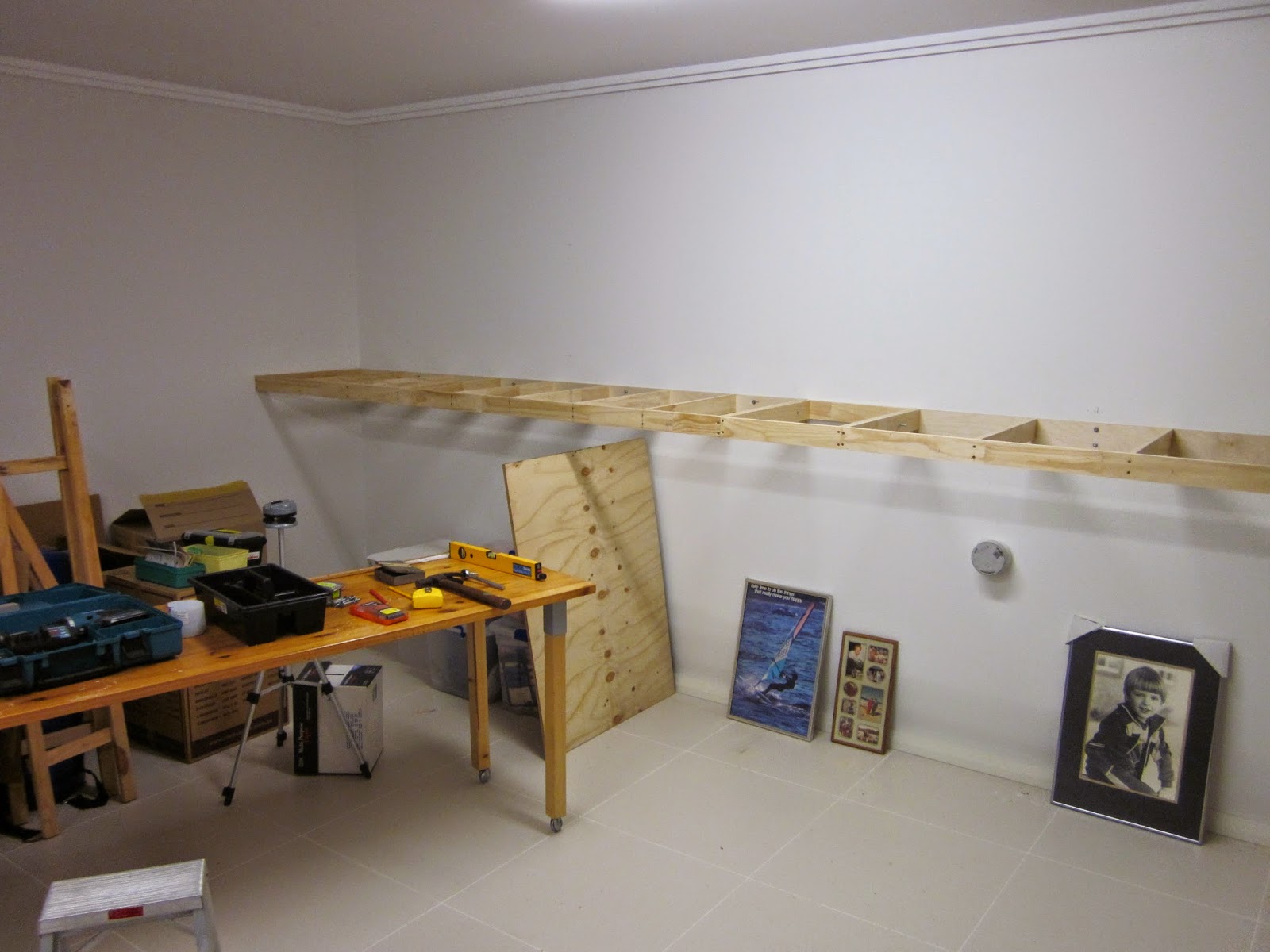 The walls of the train room are lined onto a stud wall, so it was key to find the studs. Initially I used a stud finder but found tapping the wall just as accurate. Before drilling to attach the box frames,  I made small holes in the wall to check there was an actual stud behind the location. I then drilled holes through the box frame so the screws would not split the timber. I used galvanized roofing screws (about 80mm long) to attach the frame to the walls and in several spots used a brace to ensure strength. The brace was supported by the skirting board and attached to the frame. Both ends are screwed to the wall and frame.

All the frames are screwed and glued. The base frame is up to a maximum of 60cm wide (most sections are only 50cm wide) and cross sections are every 40cm.  Cross sections are the sections between the wall and outside edge of the box frame.  The box frames were assembled in my garage prior to moving to the train room and installing. The valence box frame matches the base below but has braces (cross sections)  every 60cm, as there is less weight on the valence top. The valence has a 3mm MDF top which was painted prior to installing. Later it will be painted the sky colour to blend with the back drop. Having a drop saw to cut all the timber was a real benefit. I also invested in top quality rechargeable drills and a driver plus a spare battery always at the ready.
Here is a section of the base and valence. Note the valence "top" is actually on the bottom when hung so it will match the sky and background.
The second photo is of the island section and I used 2 posts to carry the island section. The posts are sitting on adjustable feet and tensioned into the ceiling. Once the frame was installed it was not necessary to bolt the posts to the ceiling as the frame held them in alignment. The frame is really quiet stable. 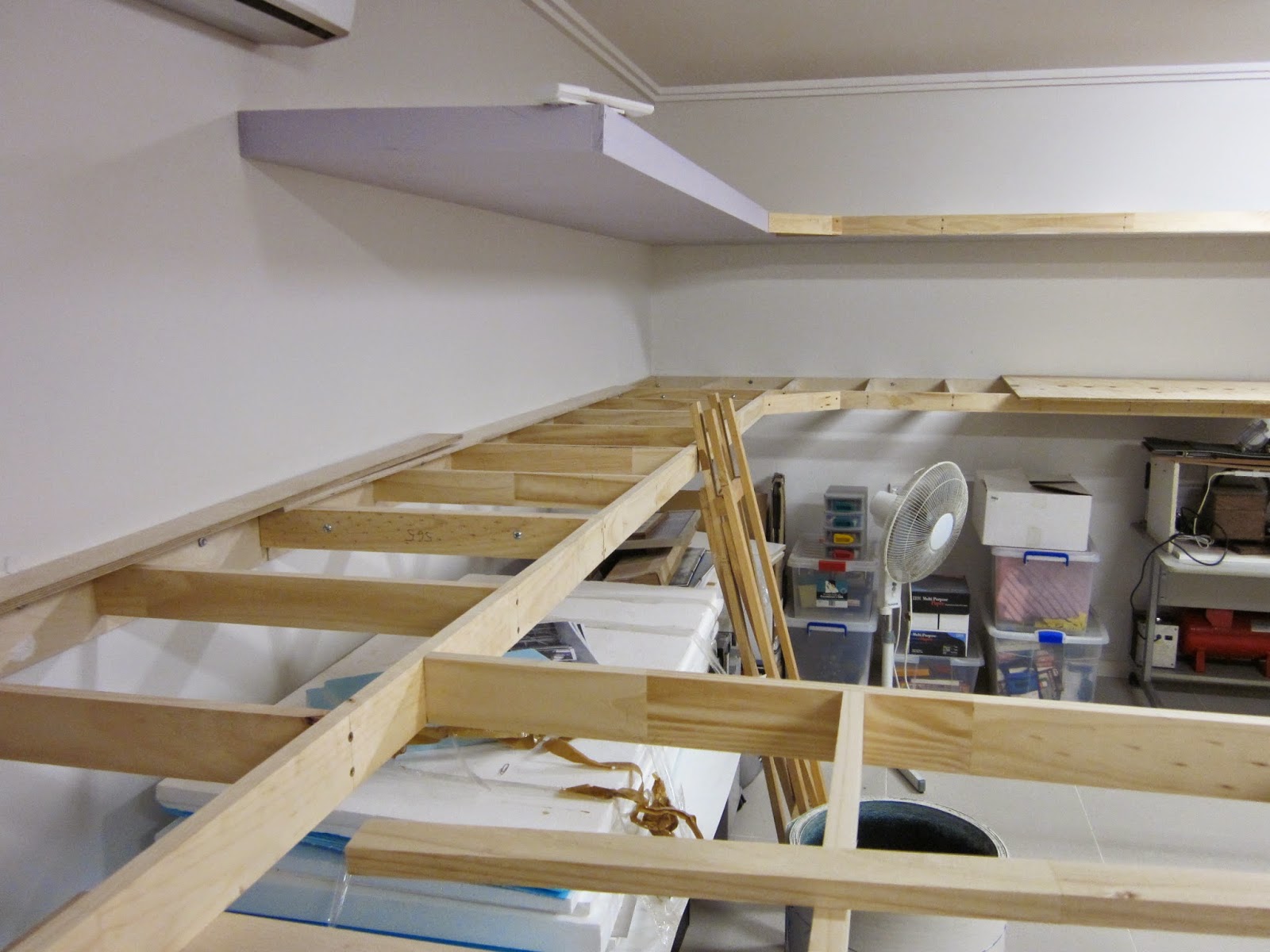 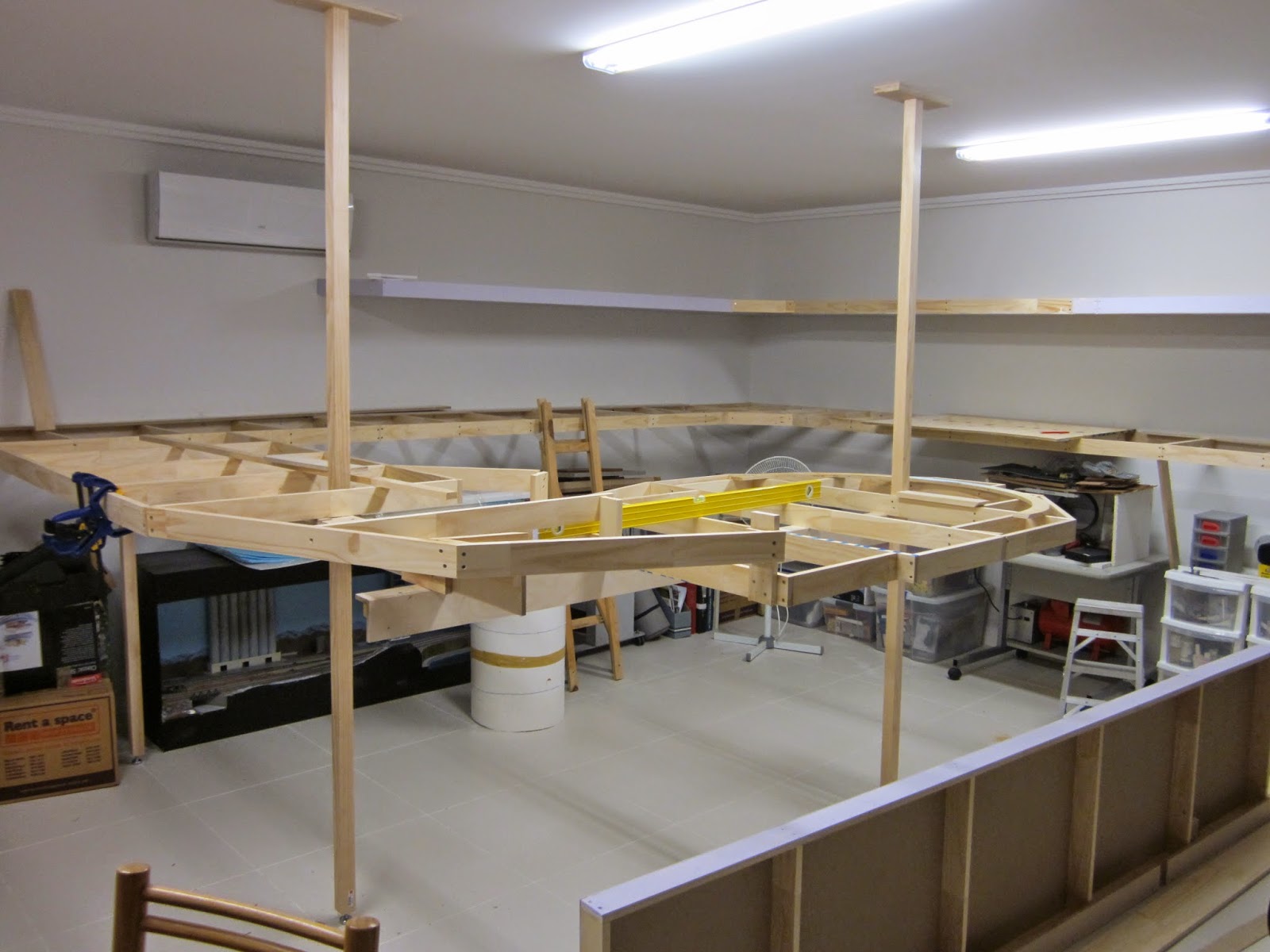 I proceeded with the base and valence and within a few weeks had all of that completed..
I then installed a backdrop which was a combination of a 20 meter plastic roll which I had previously purchased and 3mm MDF sheets. I screwed the backdrop to the wall.  Where it was going to be below track level I screwed the backdrop to the wall, and I used small nails above where the backdrop would one day be visible. I countersink the nail heads and used “no more gaps” to cover the heads before painting.
Using a continuous backdrop is important as it can bend around corners and provide a continuous  horizon with no joins. You need to seal any nail and screw holes before painting and with flexible sealers like no more gaps you can create that continuous backdrop. You can also see here the valence and the sealed joints and nail holes prior to painting. 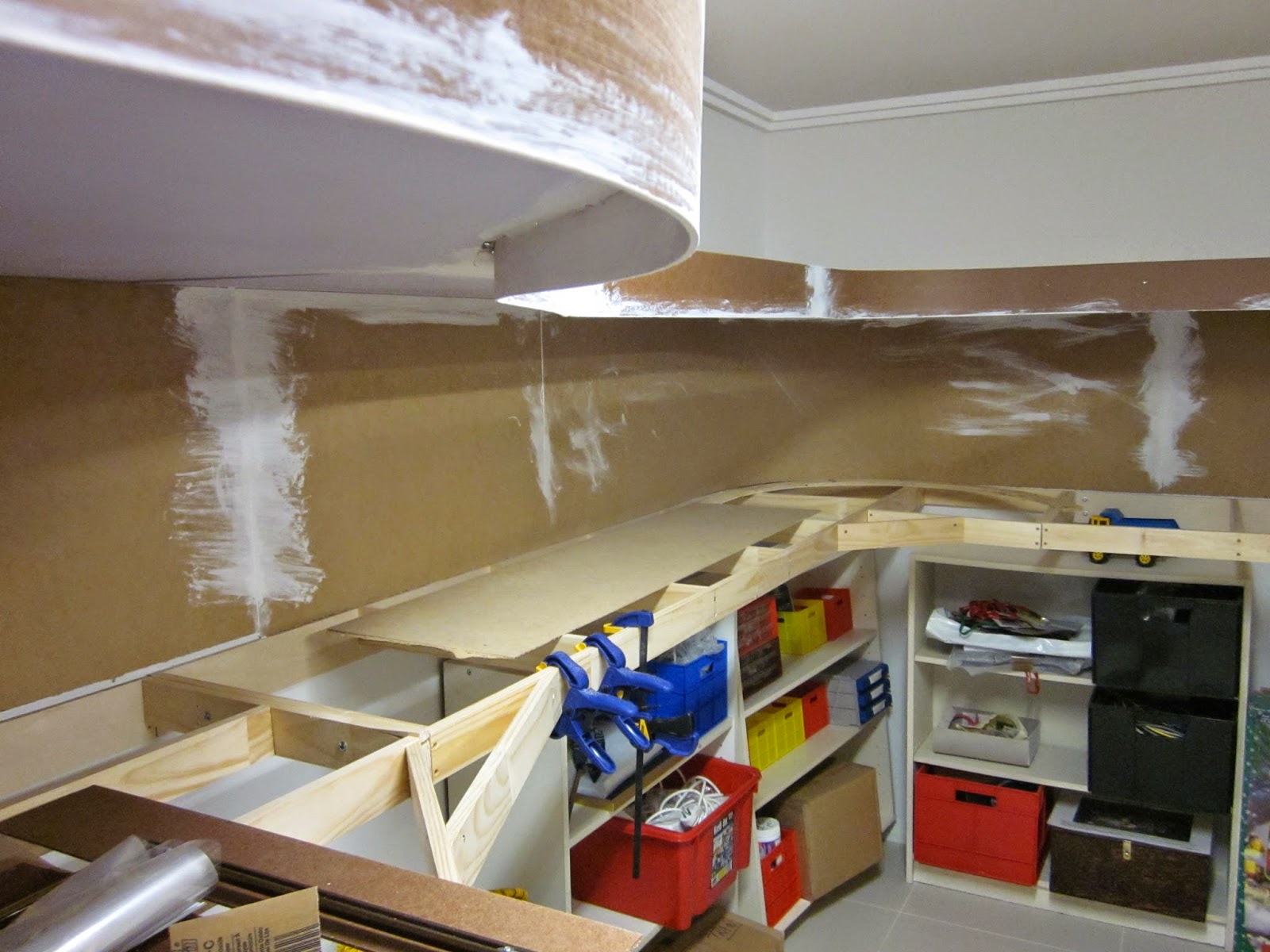 Painting the sky was a challenge and involved several selections of paint. Eventually I settled on a “SkyBlue” colour for the upper reaches and a mixture of this and white for the lower sky. I painted both together with the two cans open and two brushes so I could blend the paints as they were still wet. I used plastic paint which dries quickly – hence the reason to paint both sections together with different brushes and blend them together. Also as the train room has no windows, I wanted to stay away from as many "smells" as possible, otherwise I would have used oil based paint. At this stage I decided to have no definitive clouds, even though on my previous layout I had clouds which looked very realistic. Maybe later I will change my mind but I want the scenery and trains to be the focus – not the sky.

Here is the view at the end of May - 2 months into the project. It doesn't accurately show the sky colour  - a later effort included more "clouds" in the form of whitened sky on the lower sections of the background. 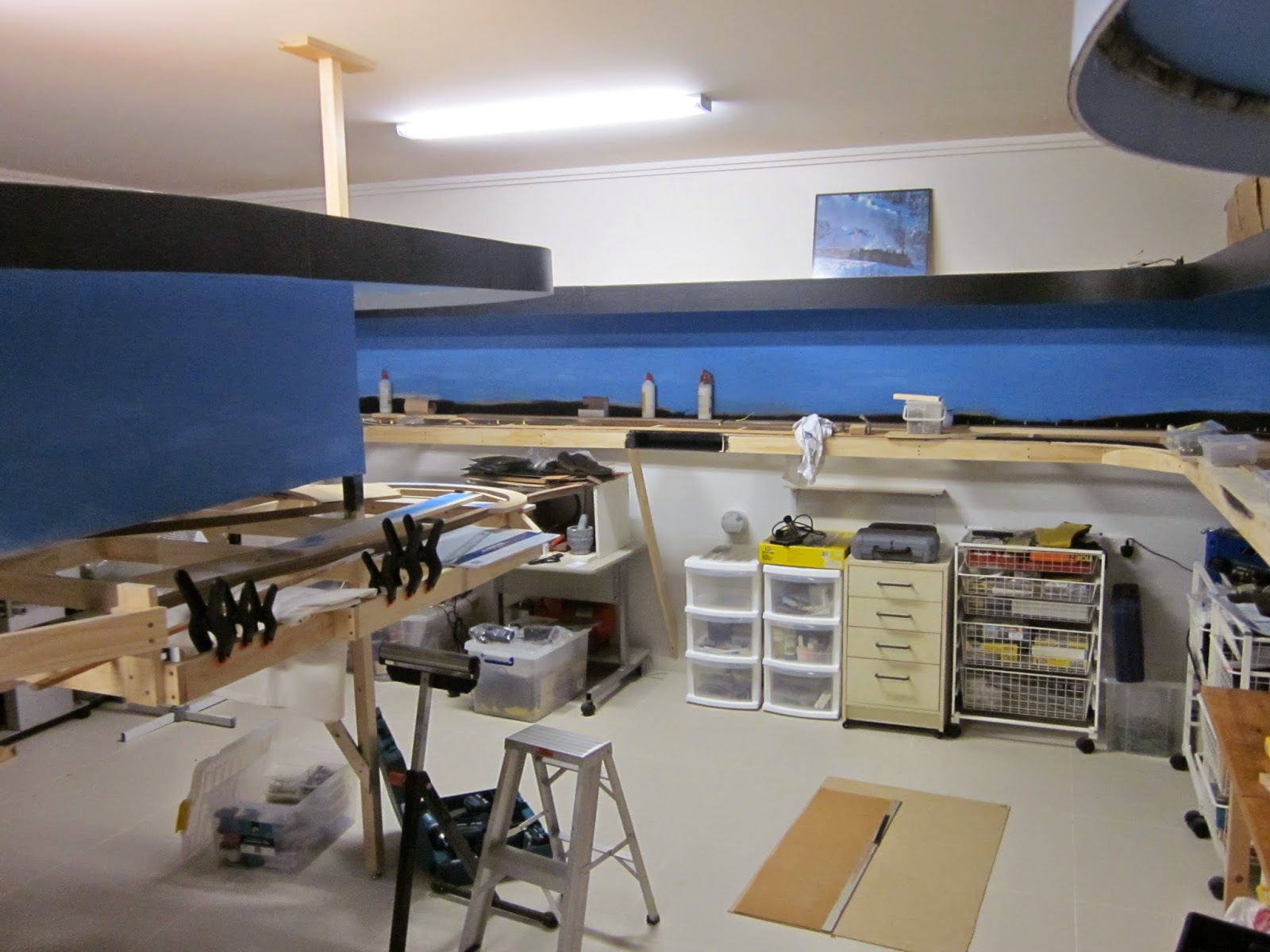 I then proceeded to install the lighting (RGB - LEDs) behind the valence - covered in a separate post.
Posted by Unknown at 00:26

Email ThisBlogThis!Share to TwitterShare to FacebookShare to Pinterest
Location: Australia